The Sixth Spring School in Risk Management, Insurance, and Finance took place on March 23–25, 2017 at the Department of Economics at the European University at St. Petersburg. N. Göran Högnäs (Åbo Akademi University, Finland), Mario V. Wüthrich (ETH Zurich, Switzerland) and Antoon A. J. Pelsser (Maastricht University, the Netherlands) introduced the audience to such topics as «Introduction to Stochastic Demography», «New Developments in Claims Reserving», and «Replicating Portfolios for the Pricing and Risk Management of Insurance Liabilities».

Göran Högnäs is Professor Emeritus of Applied Mathematics at Åbo Akademi University. He has played a central role in the probabilistic community in Finland as founding director of the national Finnish Graduate School in Stochastics and Statistics (1998–2009) and as organizer during many years of the Finnish Summer School on Probability Theory (currently in its 40th year!). He was responsible for the local organization of the Third Finnish-Soviet Symposium on Probability Theory and Mathematical Statistics, Turku 1991. His research interests are in probability theory on topological semigroups as well as Markov chain theory and stochastic population models. He is the coauthor, with Arunava Mukherjea, of the monograph Probability Measures on Semigroups. Convolution Products, Random Walks, and Random Matrices, 2nd ed. Springer 2011.

Professor Högnäs currently serves as associate editor of Journal of Theoretical Probability  (1988 – ) and Journal of Difference Equations and Applications (2008 – ). He is a member of Societas Scientiarum Fennica (Finnish Society of Sciences and Letters, est. 1838) since 1997.

Demographic factors have a profound impact on our communities, influencing public policy decisions in all walks of life, from infancy to old age. It goes without saying that reliable demographic predictions are in great demand in the modern society. Particular concerns are future pensions and the design of nursing and health care services as well as other welfare benefits.

Mathematics and mathematical models have always played a fundamental role in demography. Very early, it became evident that sound mathematical ideas are vital to the success of insurance and pension schemes, even if the possibility of failure can never be disregarded since future events cannot be foreseen with certainty.

This course briefly traces the origins of demography from its start in the 17th century. Many of the basic notions are present in the thinking of those early pioneers.

Demography relies on the law of large numbers and mass action. Deterministic models provide a natural starting point for predictions. The efforts to predict the changes in demographic parameters (such as lower mortality and, especially, variations in fertility) have not been particularly successful.

Thus modern demographic forecasts are predominantly statistical, i.e., we rely on the future being an extension of the past and the present: plus ça change, plus c’est la même chose. The course concerns the mathematics of some of the major methods used and some ways in which the demographers have tried to measure their forecast errors.

Mario V. Wüthrich is Professor in the Department of Mathematics at ETH Zurich, Honorary Visiting Professor at City University London, Honorary Professor at University College London and Swiss Finance Institute Professor. He holds a PhD in Mathematics from ETH Zurich. From 2000 to 2005, he held an actuarial position at Winterthur Insurance and was responsible for claims reserving in non-life insurance, as well as developing and implementing the Swiss Solvency Test. He is fully qualified actuary SAA, serves on the board of the Swiss Association of Actuaries, and is editor of ASTIN Bulletin.

The claims reserves are the biggest position on the liability side of the balance sheet of a non-life insurance company. They have a big impact on profit and loss statements and they are a main risk driver in solvency considerations of non-life insurance companies. The aim of this course is to discuss this position and to analyse possible deviations in claims reserves arising from prediction errors. We consider the following 4 sections:

1) We present the classical chain-ladder model and provide Mack's (static) uncertainty formula.
2) We extend Mack's static uncertainty formula to a dynamic point of view. This includes in a first step the one-year uncertainty formula (Merz–Wüthrich formula), and in a second step the total run-off uncertainty analysis. The latter is useful for cost-of-capital considerations.
3) We give a brief introduction to regression trees, which is an estimation and calibration method used in machine learning and data analytics.
4) We present an application of machine learning methods to a claims reserving problem. This will provide claims reserves for individual claims.

Antoon Pelsser is working at Kleynen Consultants and is also a Full Professor of Finance and Actuarial Science at Maastricht University and a research fellow at Netspar. His academic research interests focus on pricing models for interest rate derivatives, the pricing of insurance contracts and Asset-Liability Management (ALM) for insurance companies. He previously held positions as Erasmus University in Rotterdam and the University of Amsterdam. He has published in leading academic journals including Journal of Economic Theory, Mathematical Finance, Finance and Stochastics, Insurance: Mathematics and Economics. He is an Honorary Fellow of the Institute of Actuaries.

Besides his academic career, he has also worked in the financial industry. From 2004 until 2007 he worked at ING Group's staff department Corporate Insurance Risk Management. There he was involved in implementing a new internal model for measuring Economic Capital for ING-Insurance. From 2000 until 2004 he worked as Head of ALM for Nationale-Nederlanden. Before that, he worked 7 years in the dealing-room of ABN-Amro Bank in Amsterdam, where he was responsible for the development of pricing models for derivatives.

The School greatly benefited from the support from 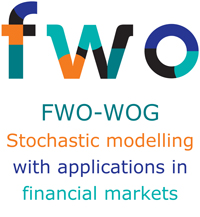 Photo Report of the School 2017

Photos can be downloaded here.