Skip to main content
Department of History
In Russian 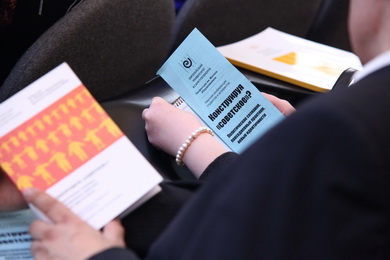 The annual conference "Constructing the 'Soviet'? Political Consciousness, Daily Practices and New Identities" has been organized by EUSP students since 2007. In the time since the collapse of the Soviet Union, a generation has grown up for whom the Soviet Union is less a matter of personal memories and more a matter of history as such, whose interpretation requires new methods and debates.

At these annual gatherings, students and graduate students present research dealing with various aspects of the "Soviet" phenomenon. Well-known scholars-anthropologists, historians, sociologists and philologists-serve as discussants.

The conference's multi-faceted view of history is ensured by interdisciplinarity and the involvement of colleagues from Ukraine, Belarus, Latvia, Hungary, Germany and other countries.

The conference is supported by the Franco-Russian Center for Research in Human and Social Sciences (Moscow) and the German Historical Institute (Moscow).