University
What is there with EUSP?

European University at St. Petersburg held an opening ceremony of a new “scientific” year on September 4, 2017, although, unlike other educational institutions, the university is temporarily unable to start the “academic” year.

EUSP Rector Nikolai Vakhtin, Provost Veljko Vujačić and the first Rector Boris Firsov greeted the recent students, graduates, faculty and employees of the university and delivered speeches which were received with sadness at times, but also with enthusiasm by all those present.

For those who were not with us on this day, but would like to join the spirit of the European University, and for all who would like to remember how it was, we are publishing the speech of Rector Nikolai Vakhtin at the opening of a new scientific year. 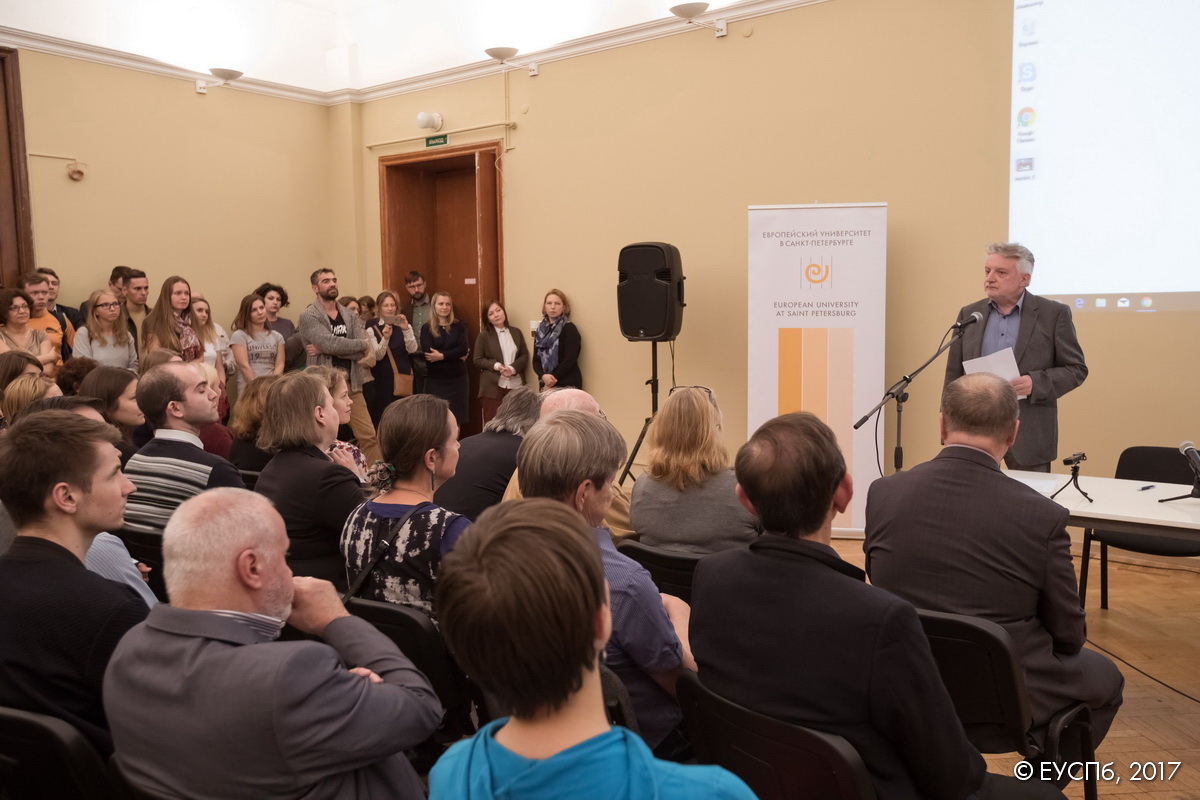 The beginning of the 22nd year at EUSP is odd. Our familiar rector is not in this hall, the familiar chairs are not here either. There are no first-year students, and there was no admission approval on the latest Academic Council meeting's agenda. Nevertheless, on your faces I see the usual joy from the fact that we are together again.

Today we are opening the 22nd year of work at EUSP, but not the academic year.

We are opening this year in the midst of moving to a new building from the palace in which we worked for more than two decades and which has become a home for many of us. The classrooms, departments, part of the library and the computer class have already moved.
We wrote an official letter to St. Petersburg's Vice-Governor Mikhail Mokretsov asking to clarify how the Russian President's order is being implemented with regard to the allocation of an alternative building for us.

We will have to leave this palace. It is sad to part with this palace, but as Mikhail Kutuzov has said, it is more important to save the army rather than territory. I think our Battle of Borodino is yet to come.

We are starting the year without a license for educational activities. Tomorrow we will apply for a new license for the third time: the documents were found to be filed improperly the first two times. We took into account every conceivable and inconceivable remark of Rosobrnadzor. I liked their following claim most of all: you have the same classrooms for both studying and independent work. What if suddenly, when there will be classes, someone wants to work independently?! Unfortunately, I am afraid Rosobrnadzor will find more hooks for further carping. But we also have enough perseverance, patience and a sense of humor. 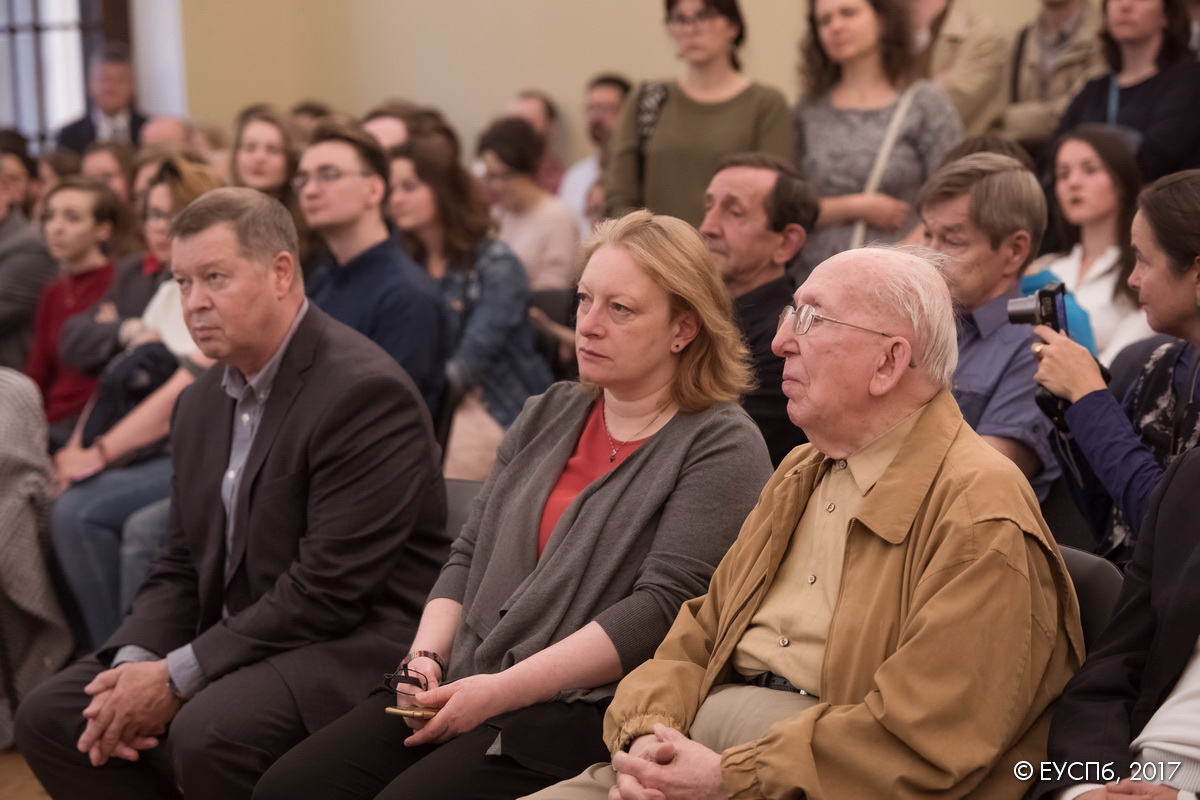 Speaking of humor. A colleague of mine, an anthropologist from Aberdeen, told me a story he found funny:

"We launched a research project with a provincial Russian university. They asked us for a copy of the license based on which we conduct educational activities. We were laughing so hard!"- he started to repeat when he saw I was not smiling. I explained why I did not smile, and asked: "How did you find a way out?" He said: "We sent them a copy of the charter by King Henry VII dated 1495 - they were satisfied"...

It reminds me of a recent story about the Russian Academy of Sciences (RAS) and the Federal Agency for Scientific Organizations (FASO). An official from FASO came to the Kunstkamera and asked with a touch of indignation: "Who gave you this building in the heart of the city?" The director of the Kunstkamera replied with embarrassment: "In fact, it was Peter the Great"... 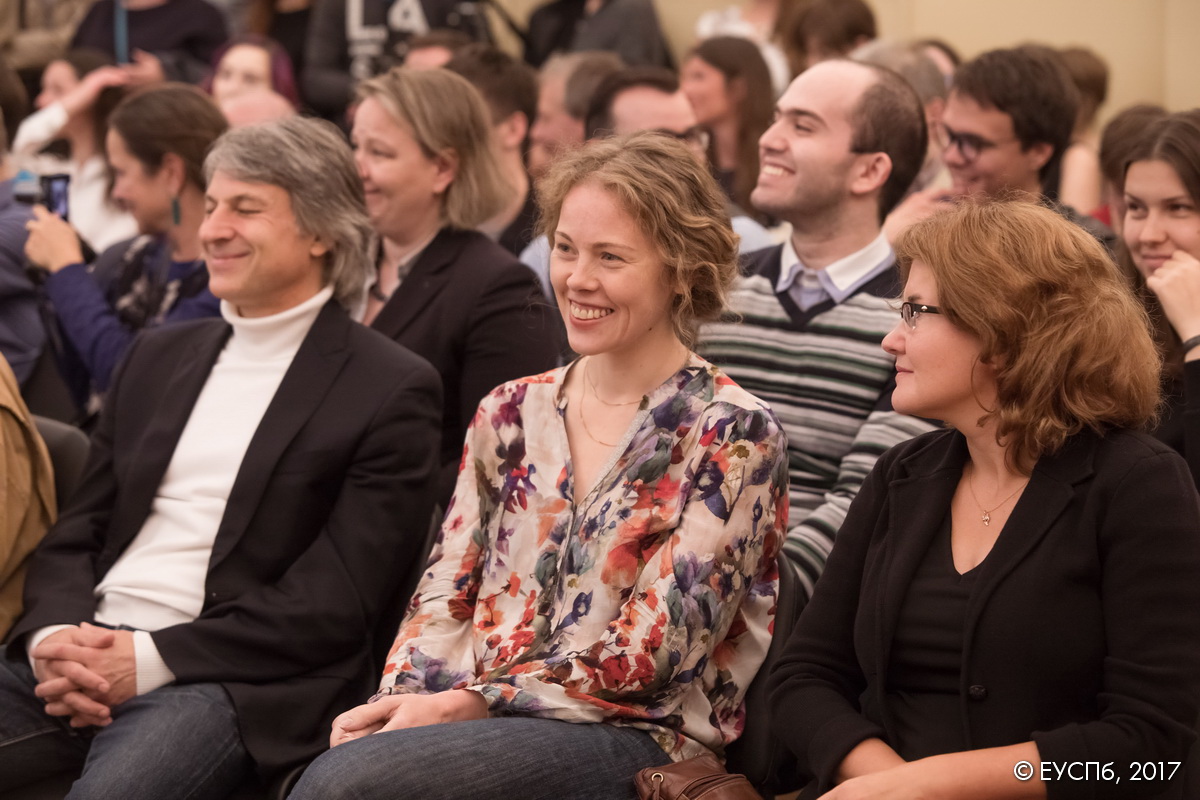 But let us get back to serious matters.

There was an interesting publication today. I will cite it in its entirety:

"We would like to remind that Rospotrebnadzor has returned to the European University the set of documents which were intended to obtain a license for the University to carry out its activities. Currently the institution has no right to carry out an admissions campaign as well as to continue the educational process for students already enrolled in the programs. EUSP Chief of Staff Alla Samoletova said the new package will take into account all the requirements of Rospotrebnadzor, and the documents will be sent to the agency on September 5" ...

They posted a photo of a building that was not ours.

"A former lecturer at the European University commented on the situation with the return of licensing documents to the university. The former employee with many years of experience in the sphere of education stated that he has resigned from the European University for moral reasons and that he personally hopes the institution will not receive the desired license.

The source noted that they have practically declared the ideology of LGTB and radical feminism within the walls of the university, and that there is also an active imposition of Western political trends upon employees and students. Most of all, according to the ex-lecturer, he was angered by the flourishing personal relationships between students and faculty within the institution, which are approaching the limits of acceptable norms of professional ethics, but are important for advancing and for successful learning at the university...

According to the law, am I right? 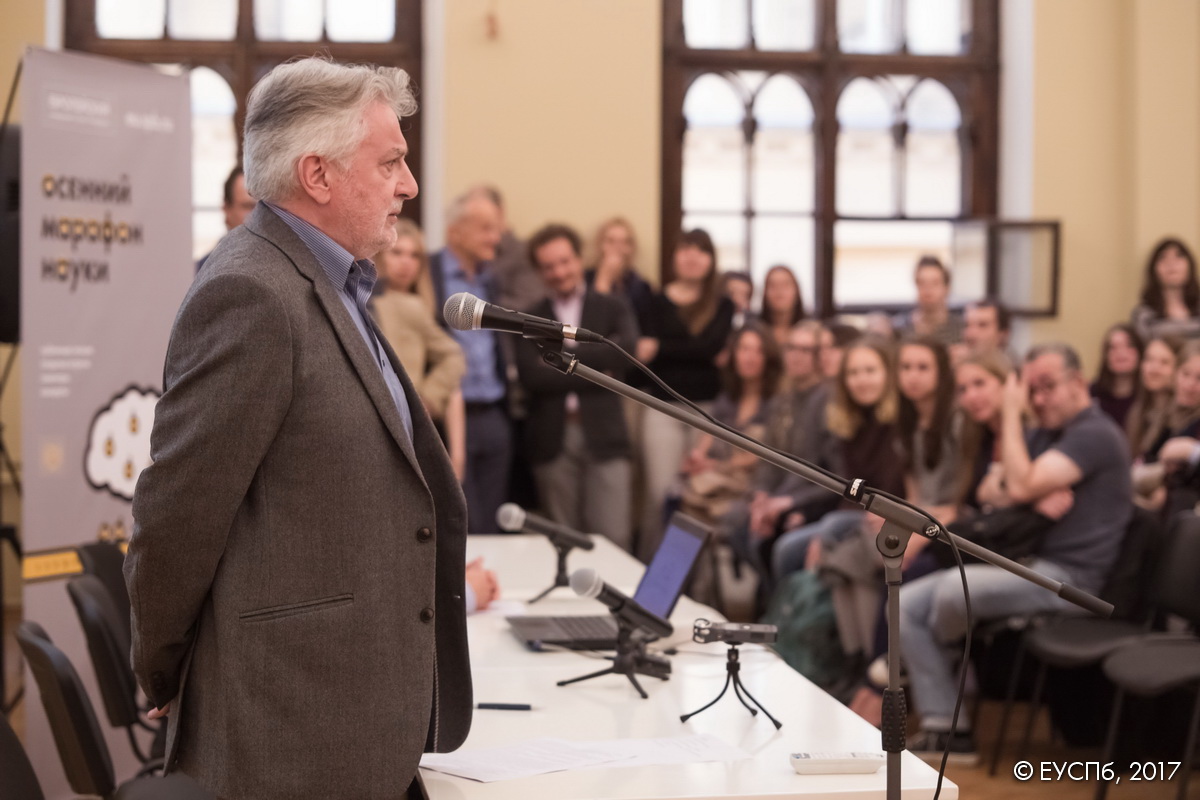 So far there is a chance that we will get the license in time .We'll see, of course, but we are aiming to start the school year no later than November 1. We need a license to announce the beginning of admissions and to enroll new students to our MA programs. It is unlikely that there will be many of them, because most of the applicants, of course, have already joined other universities. But I know for sure that there are others who are waiting. When I think of those young people who are faithfully waiting for EUSP to resume admissions it brings a lump to my throat.

But even if we cannot resume admissions in time and we are destined to live this year not as an educational institution, but as a scientific research institution, I am sure that sooner or later we will restore everything that we missed or lost. We have not lost the main thing: the reputation of one of the best educational institutions in our country, where young people strive to study and apply from all over Russia and not only Russia.

We have not lost the reputation of a university in which academic freedom and the variety of beliefs and opinions are some of the principal values. We have professors of very different political convictions- conservatives, liberals, republicans, and even Marxists; and as long as these professors do not use classrooms to propagate their political beliefs - that is prohibited by the EUSP Charter - we are happy they work with us. We give primary importance to professionalism, academic reputation and quality of teaching.

Finally, we have not lost the reputation of an intellectual center, a place where interesting academic conferences are happening all the time, public lectures are being delivered. A place where academic celebrities come from all over the world and talk about their work.

I would like to tell you more about that.

The absence of an educational license does not mean EUSP professors will not be doing anything in the near future. Of course, a university without students is the dream of every professor, but we must use this forced pause to move other aspects of our work forward. First of all it is academic work: I hope by the end of 2017 our professors will be able to publish even more articles and books than they usually do. 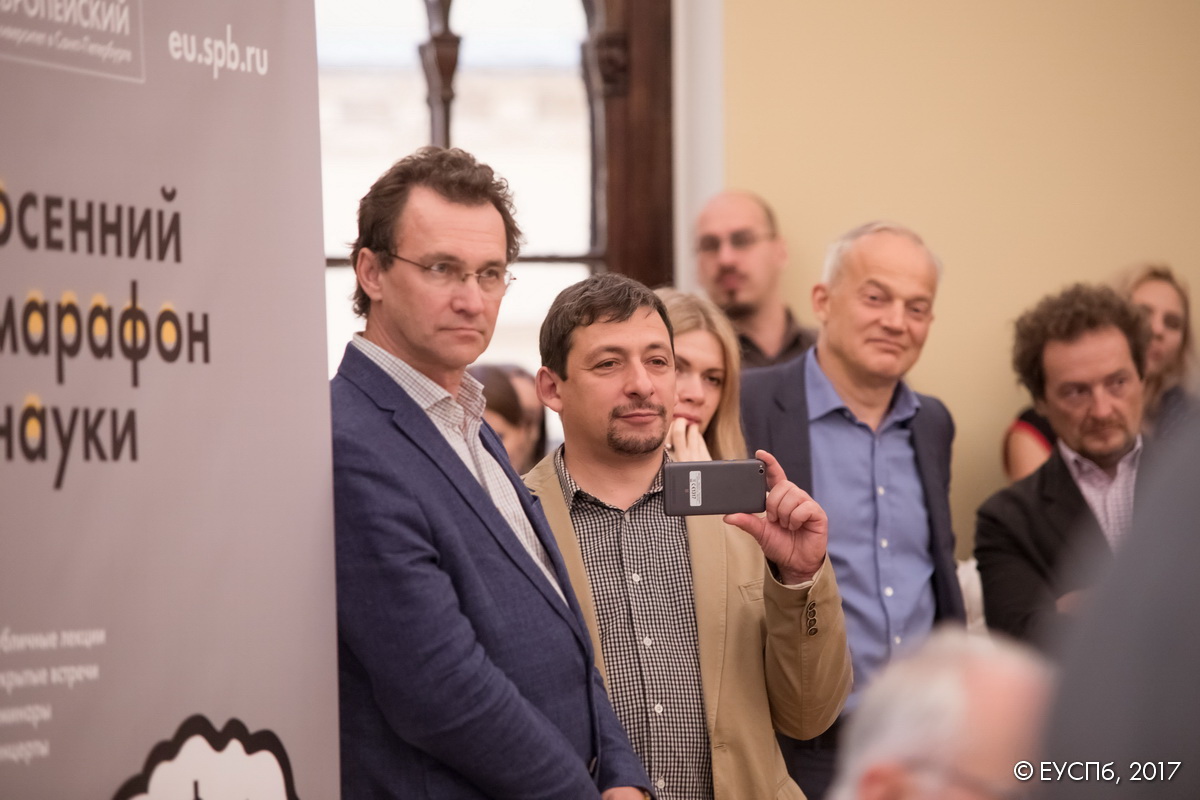 But that is not all: the training programs require adjustments, and while professors are not engaged in teaching, this is an excellent opportunity to think calmly and without any rush whether we are doing everything in the best way, whether we have optimally designed educational plans in all programs and areas. And here I do not mean their formal compliance with Rosobrnadzor standards, but their content, their logic and cohesiveness.

Finally, the absence of a license does not eliminate our right to offer public lectures by our professors and not only our professors. We have announced the "Autumn Marathon" of science at EUSP, the program of the marathon has been published on our website; everything is very interesting and eventful there - performances, concerts, and lectures - every day in September. Come and invite your colleagues! I encourage you to disseminate information in social networks. Share-like-repost, as they say. We would like to see lots of visitors here to make sure the city supports us.

Regardless of everything, I congratulate everyone on the beginning of the 22nd year of work at EUSP and I sincerely hope all of us will demonstrate the qualities that have made the EUSP community different at these times of hardships: confidence in the rectitude and righteousness of our cause, adherence to university traditions, amicable solidarity and patience. 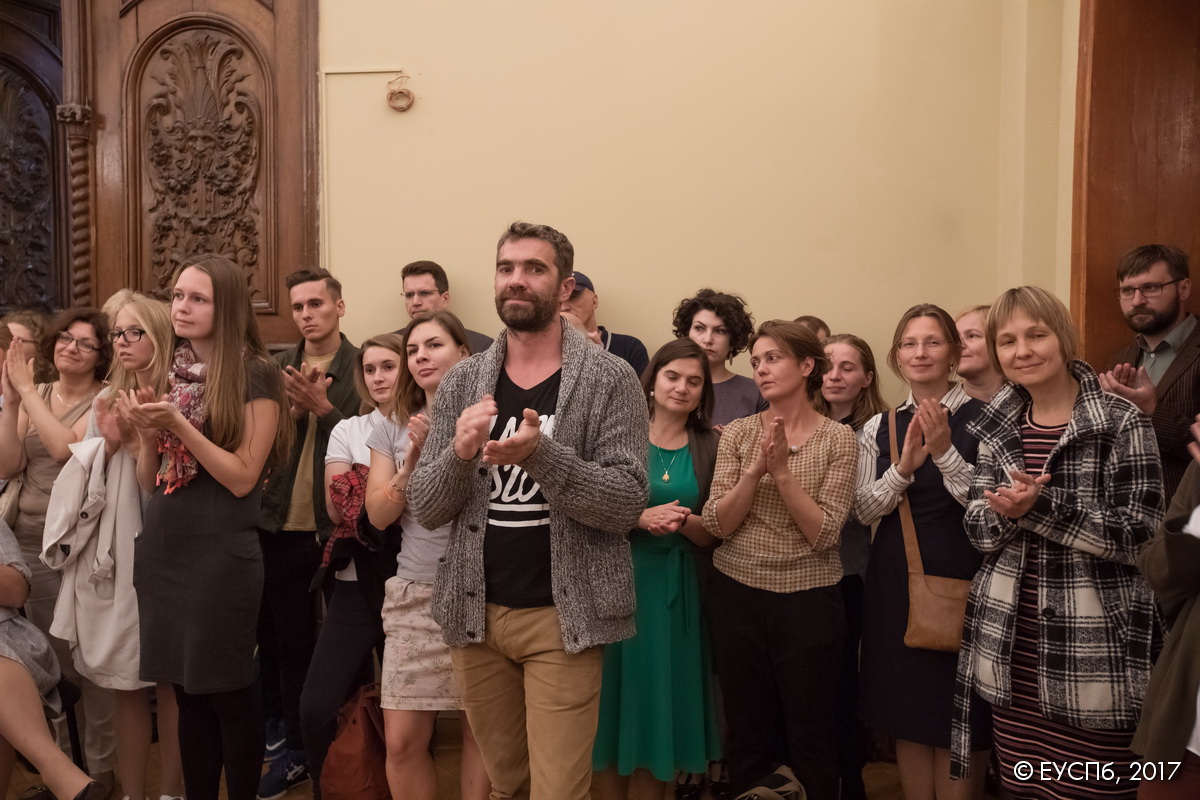