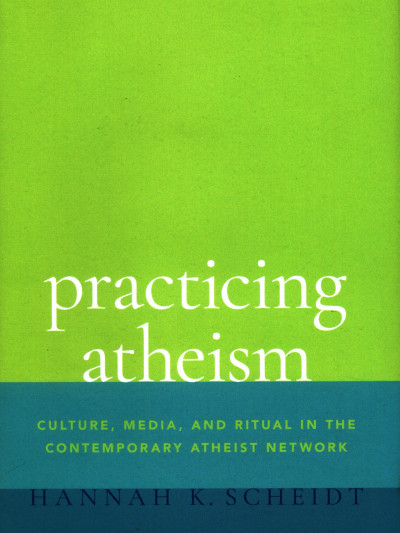 The number of people claiming no religious affiliation has skyrocketed in recent years, and that growth shows no signs of slowing down. But while the religiously unaffiliated demonstrate a variety of attitudes toward religious belief - including, in many cases, a complete lack of interest - a prominent subset of nonbelievers has claimed the mantle of "atheism". For them, atheism has become a marker of identity and a source of community. However, atheists themselves often disagree about core ideas, values, affinities, and attitudes. Contemporary atheist culture is marked by debates over deconversion, the relationship between science and religion, and the role of authority. What exactly does it mean to be an "atheist" beyond a simple lack of belief in a higher power? Hannah K. Scheidt’s "Practicing Atheism : Culture, Media, and Ritual in the Contemporary Atheist Network" examines the variety of cultural products, both corporate-driven and grassroots, that carry messages about atheism and its relationships to religion. Through primary source materials such as Internet communities, popular television programming, and cultural representations of the movement such as those found in atheist fan art, the book paints a portrait of a culture in unique tension with religion, and provides a unique perspective on whether or not organized atheism constitutes a belief system in itself.