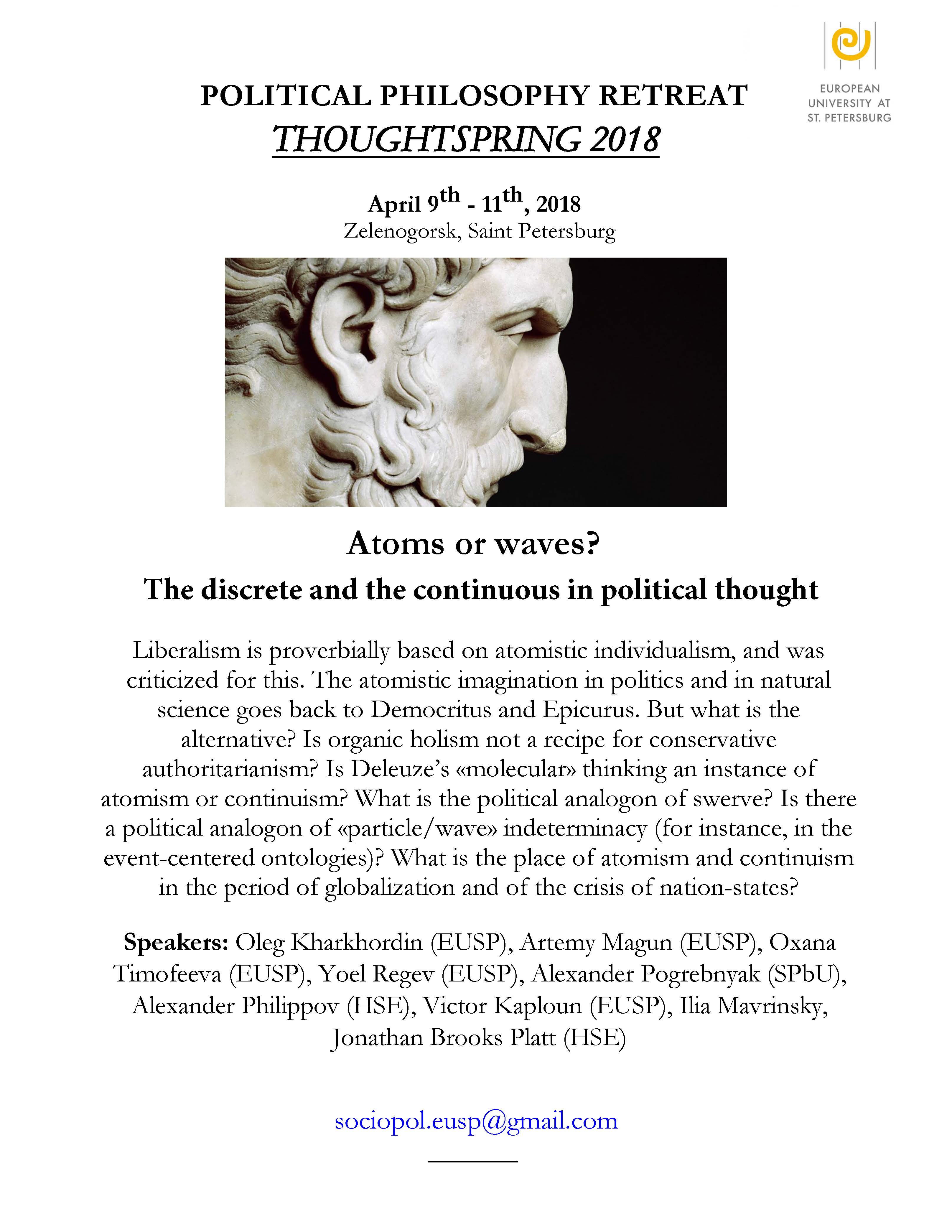 February 16, 6 p.m., White Hall (room 430), a historian and sociology Mischa Gabowitsch gave a talk “Are Copycats Subversive? Strategy-31, the Russian Runs, the Immortal Regiment, and the Transformative Potential of Non-Hierarchical Movements”. Some of the most visible recent movements in Russia cannot be accurately described as either bottom-up or top-down. They are copycat movements, in that the initial idea for a new type of public activity spreads quickly across numerous locales with minimal organizational efforts on the part of those who originated it. This talk analyzes three such movements and discusses the structural features they share despite their widely differing ideological background, objectives, and popularity: the Strategy-31 protests for the freedom of assembly, the ultranationalist temperance movement known as Russian Runs, and the commemorative processions titled Immortal Regiment.

February 21, 7 p.m., Conference-Hall (room 201), Alenka Zupančič (The Institute of Philosophy of the Scientific Research Centre of the Slovenian Academy of Sciences and Arts) will give an open lecture “Sex and Ontology”. The lecture will explore the encounter between psychoanalysis and philosophy at the point where the two seem to be the most incompatible. Sex (and psychoanalytic theory of sexuality) is something that philosophy usually doesn't know what to do with; sex is the question usually left out in even the most friendly philosophical appropriations of Lacan and his concepts. And ontology (as since of pure being) is something that psychoanalysis doesn't know what to do with, or is highly critical about. The lecture will take these two notions and cast them, so to say, in the opposite camps. It will argue that sex is the properly philosophical (ontological) question of psychoanalysis, and present some consequences that this shift of perspective has for philosophy.

A new Artemy Magun's paper “Spontaneity and Revolution” was published in the South Atlantic Quarterly. This article discusses the heritage of 1917 in one important aspect: the problem of spontaneity. It then describes and problematizes, from this angle, the contemporary movements of the liberal Left. It appears that spontaneity is at odds with the need of these movements to internationalize and undermines their legitimacy, at the national level. Based on this empirical and practical observation, backed with examples from recent protest movements and from the 1917 Russian Revolution, there follows a philosophical analysis of spontaneity, which proves to be a contradictory, dialectical concept. A progressive political movement of the future, to be successful, may not be “spontaneous” in the sense of immediacy, but it is important for it to be faithful to the genuine sense of spontaneity as a synthesis of elementality and organization.

The Department offers graduate education in the areas of political science and sociology. The Department’s program of advanced training includes specializations in political science, sociology and gender studies and consists of two stages. The first stage is the Master's program (Master of Arts, M.A.) with specialization in either "Social Institutions and Practices" or "Political Processes and Institutions". The program is completed by writing a Master's thesis. Provided the students have met all requirements and received a diploma, they can continue their studies and research leading to a higher academic degree (or Ph.D. degree), which they may receive upon completion of the next stage of studies, dedicated to the writing of the dissertation (second stage). During the Ph.D. program, students attend classes, take exams, and write a thesis under the supervision of a committee of 4 professors. The partial validation of the Department’s basic program by the University of Helsinki is important for the Department’s students.

The political science portion of the program focuses on the political theory of democracy, comparative politics and Russian politics. The main sociological subjects are social theory, social stratification, sociology of science, historical sociology, and science and technology studies. The gender studies program offers unique training in the study of sex, gender and sexuality. The department is actively developing such areas as family studies, Russian and post-Soviet politics, economic sociology, the history of political concepts, the history of social movements, the study of interethnic relations, Russian regional studies, and the sociology of health and medicine.

Students admitted to the department find a unique atmosphere of collective creativity amongst faculty and students: constant scholarly dialogue and a discussion of innovations in critical thought and the acute social problems in Russia and the world are combined with a challenging academic load. EUSP alumni remember this experience as an initiation from which they emerged professionals.